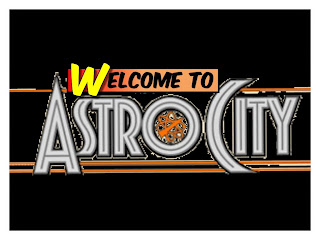 Greetings readers to a special blog post covering a recent fan chat with Kurt Busiek over at the Millar World Forum. (http://forums.millarworld.tv/t/wednesday-fan-chat-30-kurt-busiek/2521/9) I was fortunate enough to get to interact with Kurt and ask him some questions about Astro City. I will reproduce here my questions to Kurt and his responses to them.

So first off here were my questions (http://forums.millarworld.tv/t/wednesday-fan-chat-30-kurt-busiek/2521/14?u=doctorg):

"Hello Kurt,
As many others of said, thank you for taking the time to conduct this fan chat with us. I have been a huge fan of your work since MARVELS and am a die hard Astro City fan. I am the same Dr.G -Nerdologist the runs the Welcome to Astro City podcast through the Pulp 2 Pixel feed. Rereading the series from the beginning has been a treat and a chance to discover new things I missed the first time through. In rereading I do have a few questions that have come up.
1.) This first question is a multi-parter: The comic book creation process is a collaborative process between the writer and artist, often with the influence being a two way street. Having worked with the amazing Brent E Anderson for the last 20 years on Astro City, how has his particular style of art influenced the types of stories you have told or they way you went about telling them? Also if you could elaborate on how so long and fruitful a partnership began.

2.) Regarding the aging of the characters and the world of Astro City, in a previous interview I listened to you mention how the Quarrel/Crackerjack story you recently completed changed from your original idea because by the time you were ready to write the story the characters had also aged. In my opinion, this made the story one of the strongest and most emotional you have written in a series full of strong emotionally real stories. My question is what other stories have changed from your initial idea to the final version because of the time between your first introduction and the time we get to see those characters again?

3.) Finally for the pure fanboy questions: Are we going to see and N-Forcer story anytime soon? (I have been chomping at the bit for one since his second appearance in vol 1. issue 2 "The Scoop"). & Have you thought about a story of Astro City's Municipal Workers a la Damage Control style?"

As for how we started working together, I'm sure I've told this story before. I was on a panel at a 1994 Worldcon, back when I was putting together ideas for ASTRO CITY, and Brent was in the audience, asking interesting questions. After the panel, Len Wein and Marv Wolfman introduced us, and I asked Brent if he'd be interested in drawing an issue of this new series I was trying to put together. Back then, I imagined it as being drawn by different artists for each story. He said sure, he'd like that.

Later, when I was thinking about the Confessor story, I asked if he'd like to do a whole arc instead. He said sure, he'd like that.

And when we were pitching it around, it became obvious that not having a regular artist was going to be a lot of editorial trouble, and I figured Brent could draw everything the book needed, so I asked if he'd like to be the regular artist. He said sure, he'd like that.
He's a hard guy to convince of things, clearly.

He said he'd stick around for ten years, and we laughed at the idea the book would last so long. Now it's been twenty, and he hasn't quit on me yet…


Kurt also answered questions from other participating in the forum about the possibility of a TV or Film adaptation of the Astro City universe of stories:

"I used to think ASTRO CITY was unfilmable, due to the expense of SFX and the focus on character drama over action. You'd have to spend all that money on spectacle, and then make it the background rather than the main story. But times have changed, SFX aren't as expensive as they used to be, and the prospect of an FX-heavy blockbuster about character drama hasn't been unworkable since TITANIC (see how old I am?).

So I think ASTRO CITY could work well as TV (probably not broadcast network TV, with their unrelenting schedule, but cable or streaming or something like that) or as movies, so I stopped answering inquiries about the rights with an out-of-hand rejection. And there's always been someone interested in ASTRO CITY, and deals happen and then deals expire and then new deals happen, because making a movie or TV show is a process fraught with peril, where most things that get started don't happen. But it certainly could be done, and maybe eventually it will be.
As for the current zeitgeist, I like it on selfish grounds: When Hollywood is paying for comics projects and I have a bunch of projects they could buy, that's good for me and the artists I work with. As an audience member, I like a lot of the results -- I like what Marvel's been doing, and I like that DC's making stuff happen on TV. Mainly, if the focus on comics makes for good shows, I'll watch 'em and if it doesn't I won't, but I'm glad it's happening overall and hope it doesn't all crash and burn at some point."

Elsewhere in the Fan Chat Kurt also discussed his thoughts on creator owned versus work for hire projects in the comics industry as well as some of his past and upcoming projects. He even let us behind the curtain on some of his creative process:

“Yeah, I've been moving away from doing work-for-hire and more toward my own creations -- the only WFH project I still have on my desk is BATMAN: CREATURE OF THE NIGHT, and once I'm done with that I'm hoping to do fully creator-owned stuff for at least a while. If I get the itch to do big-company superheroes again I can always change my mind, but for now I'm happy making up my own worlds.

As for genres...well, I don't need Marvel and DC to do superheroes, so I'll continue to do some hero material -- not only ASTRO CITY, but other things I've got in the pipeline. But I like all kinds of different approaches to storytelling, so I'm not wedded to any one genre. I'm doing epic fantasy in THE AUTUMNLANDS, did SF in SHOCKROCKETS, historical fantasy (or maybe alt-historical) in ARROWSMITH, and so on. A lot of the ideas I have jotted down for future projects are what used to be called urban fantasy and these days is called mythic fiction, so that's a genre I'd like to do more with. But romance, history, crime, straight drama...I'd like to explore a lot of things.
No, I never came up with anything that stumped George. I think he's un-stumpable. But then, I never asked him to draw specific panels -- we worked together plot style, so he was always free to tell the story as he saw best, and he sure did. And yes, he added lots of panels, lots of detail, lots of lots. It was a blast.

I work in whatever way will suit the project and the artist, really. Alex and I did MARVELS full-script, and most of ASTRO CITY has been done full-script (though there's been a Marvel-style issue or two in there), but AVENGERS and ARROWSMITH and UNTOLD TALES OF SPIDER-MAN were plot-style. It all depends on what'll get the best results. Sometimes I've done rough page layouts, too, or even just drawn out panel shapes. I believe in doing whatever's necessary to make a good comic book, and that varies from project to project. 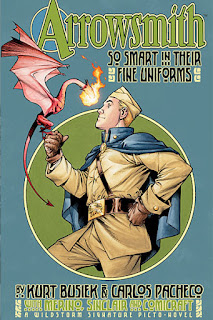 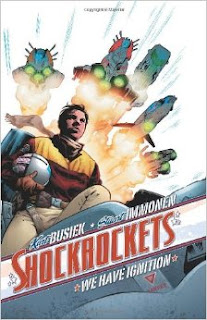 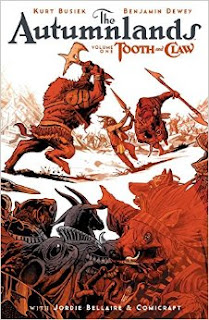 All in all this was a great experience and I hope be able to get more opportunities to share the words and thoughts of the creators of Astro City. 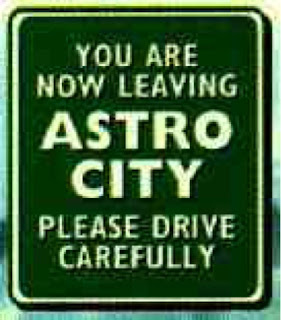