In this episode we will discuss Volume 2 issues #22 of Kurt Busiek's Astro City titled "Great Expectations". This issue feature the unlikely superhero the Crimson Cougar. Check out this episode!
Posted by Man of Nerdology at 3:40 PM No comments:

Marvel's Secret Wars & Beyond will be a semi-monthly show where Dead Robin the Human Sidekick and Doctor G the Man of Nerdology will read & review Marvel's 1984 series Secret Wars as well as the sequels and connected issues. We will look at all series bearing the Secret Wars titles old and new and see how they have altered and shaped the Marvel Universe since that original 12 issue series. In episode, we will be reading and discussing issue #6 of the original 12 issue maxi-series published in 1984 as a partnership with Mattel to launch an action figure line. We are also available on Google Play at: https://goo.gl/app/playmusic?ibi=com.google.PlayMusic&isi=691797987&ius=googleplaymusic&link=https://play.google.com/music/m/Ic5chgac46rwlfe5ilbinnugroa?t%3DPulp_2_Pixel_Podcasts Check out this episode!
Posted by Man of Nerdology at 9:29 PM No comments: 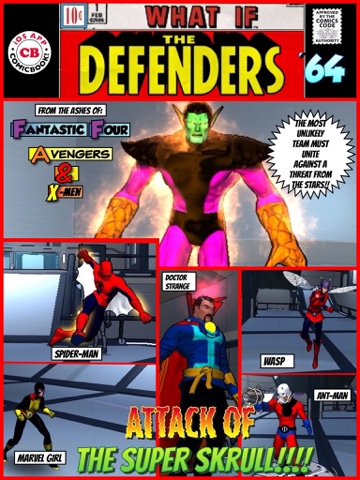 Greetings readers to another in the series of my fan art obsessions. This time I turned my attention to an idea I had had for a Marvel FASERIP campaign setting. It is a What If set at the Marvel Age of heroes.

Tragedy starts when the Fantastic Four are lost to an atomic blast as they faced the subterranean threat of the Mole Man on Monster Island. Next the Asgardian trickster God Loki gets his revenge on his half brother the Mighty Thor as he manipulates the Incredible Hulk into slaying the Thunder God. Tony Stark the Invincible Iron Man is also killed in this battle and with him the Avengers dream goes unfulfilled.  Finally the mutant teens known only as the X-Men are cut down as they attempt to thwart the plans of the mutant terrorist Magneto to steal U.S. Nuclear Weapons.

In the wake of these tragic loses survivors emerge from the ashes, broken but not defeated. With the lose of Reed Richards and Tony Stark, Hank Pym finds himself to be more and more the super scientist on call as threats both foreign and extraterrestrial crop up. He and Jan have little time to morn the loss of Iron Man ans Thor as their abilities as Ant-Man and the Wasp are put to the test. Professor X reeling from the loss of Cyclops, Beast, Angel, and Ice Man retreats with Jean, the only survivor of the battle with Magneto to his School in West Chester. There the Professor and Jean process their grief while the Xavier ponders the secret he is keeping from Jean regarding the battle with Magneto.

Posted by Man of Nerdology at 6:46 PM No comments: