Secret Sagas of the Multiverse #5: Alpha Flight vs X-Men 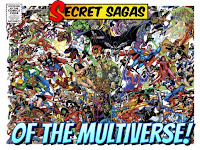 I begin reading comics in 1980 but wouldn’t call myself a collector until 1986, Growing up during this time, I had a Classic X-Men run that covered the Chris Claremont and Dave Cockrum run to the Claremont and John Byrne years ending a few issues after the “Dark Phoenix Saga”. I had also been collecting Uncanny X-Men run that was mainly Claremont and Marc Silvestri. With Claremont on words these three artists encompassed my personal X-Men continuity. 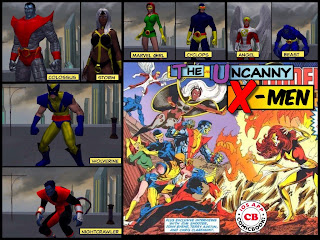 John Byrne’s run with the X-Men is my favorite part of that personal continuity by far. His pencils with the heavy brush of Terry Austin gave a weight to all the characters much like Neal Adams work. Byrne’s Wolverine is one of my favorite and I always felt truest visual expressions of the character. Wolverine is also the genesis of my love of all things Canadian. It is then little wonder Alpha Flight is my second favorite misfit team of Marvel Superheroes after the X-Men. 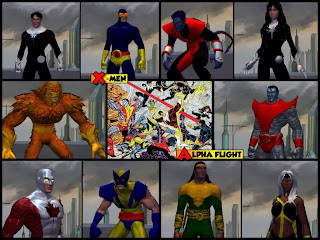 Though Guardian would first appear under the name Vindicator in Uncanny X-Men #109 in February of 1978, the actual Alpha Flight time would not appear until April of 1979 in Uncanny X-Men #120-121. I have a nod to the first battle in the middle digital art piece above. They would appear again in issues #139 and #140 in November and December of 1980 this times as allies to Wolverine and Nightcrawler as they hunt the Wendigo. In August of 1983 Alpha Flight would get their own series written and drawn by John Byrne. 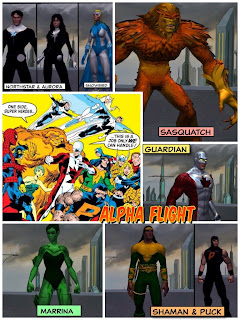 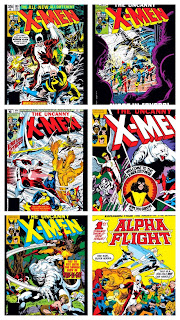 Alpha Flight could be described as the team that is trying it’s best to be the Avengers but keeps ending up being the Doom Patrol. One of the themes that reoccurs the most in the first 28 issue John Byrne run is that the members of Alpha Flight are the source of most of their problems. By issue #2 teammates are murderously turning on each other and that trend of internal fracturing continues throughout the run. Yet with all the internal strife and the barely a team aspect of this superteam, I still love these characters. Much of that love I am sure is coming from the beautifully rendered art of John Byrne through this era of the series. Also the occasional Wolverine cameo doesn’t hurt either.

Posted by Man of Nerdology at 9:11 AM